In 2004, the Haddonfield Memorial High School earned the distinction of being named a Blue Ribbon School.

The National Blue Ribbon Schools program recognizes public and private elementary, middle and high schools based on their overall academic excellence or their progress in closing achievement gaps among student subgroups. The award affirms the hard work of students, educators, families, and communities in creating safe and welcoming schools where students master challenging content.

With average SAT and ACT scores that are recognized as among the best of South Jersey’s public high schools, the school prepares its students for continuing education and successful careers.

US News & World Report: HMHS is Best in South Jersey

The reputable magazine’s annual ranking puts Haddonfield Memorial High School at #729 in the country. HMHS was ranked 32nd in the state of New Jersey. 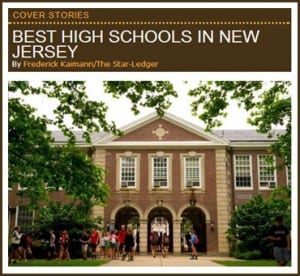 The Star Ledger and Niche.com have also given HMHS top marks. Labeled an A+ school, HMHS ranks 26 out of 411 for best public high schools in New Jersey, 27 out of 400 for best college prep, and 20th out of 608 for best high school sports.

Best Bang for the Buck

In 2015, website NerdWallet ranked the Haddonfield district No. 1 on its list of “Best School Districts for Your Buck in New Jersey,” which makes not only staff and students proud but taxpayers, too.

Haddonfield was the only South Jersey district in the top 10. It also placed first in the top 10 for the percentage of graduates who enrolled in a four-year institution. NerdWallet cited the Haddonfield district’s high scores on standardized tests and mentioned the philanthropic spirit of its students.

In February 2022, one HMHS student has been notified that he has advanced to National Merit Finalists, placing him in the top 99% of all test-takers. Each year, over 3.5 million high school students take the National Merit Scholarship Qualifying Test, also known as the PSAT. Approximately 34,000 of these students receive Letters of Commendation from the National Merit Scholarship Corporation, and about 15,000 of them are named as finalists. In March, about half of these students will be notified that they have earned a college scholarship.

HMHS senior leads efforts to collect much-needed items for homeless shelter in Camden, N.J.. “The need for these diapers, toiletries and other things continues after the holidays.”  Read more …

Lacrosse player, Peer Leader, in college to study sports communications. “My mom is a graduate of  Haddonfield, and so she knew that Haddonfield has excellent academics and athletics. The teachers really get to know you and genuinely want what’s best for you. In Greek Drama, my teacher knew I was afraid of public speaking, and she helped me to overcome it.”

Soccer player, Peer Leader, in college to study nursing.
“I came to HMHS as a freshman from a much larger school district that didn’t really challenge me academically. I have loved so many classes, but especially AP Bio where the teacher engaged all of us and made me love science. At HMHS, I found out who I really am.”

“I decided to send my son to HMHS as a tuition student because of its success with regard to having a high-level of academic programs and extraordinary student support.”

“I have had three tuition students at Haddonfield. My first child received a college scholarship from the Haddonfield Educational Trust as well as an athletic college scholarship. She is pre-med now. My second child is a HMHS grad and has been accepted to a very competitive Doctor of Physical Therapy program. My son has just begun his sophomore year. We could not ask for better teachers, coaches or guidance counselors​.”

Softball player, National Honor Society member, in college to become a physical therapist. “My mom moved me from a small private school to Haddonfield when I was in sixth grade. It was hard at first, because Haddonfield really challenges us. But once I realized I could do the work, my confidence soared and I began to excel.”

Sophomore. “My mom really made the decision to move me from another public school district, but I was excited to go to a better middle and high school. The students were easy to get to know. Better education, better college, and better life.”

Sophomore, winter track team member. “I came to Haddonfield Middle School in sixth grade, and I was surprised at the workload at first. But I saw my sister do it, and I just settled in. We do cool stuff in biology. Last year, we extracted DNA from strawberries!”

“Our daughter is a highly motivated, competitive student-athlete. HMHS was the best choice for her because the environment enabled her to thrive academically as well as athletically. There is no doubt in our minds that our daughter is well prepared for college!”

Learn more about the Haddonfield school experience by requesting our informational folder. All Tuition Program inquiries for grades 8, 9, 10, 11 and 12 start with a simple phone call to Barbara Nobel in the Business Office at 856-429-7510(ext. 6217) or an email.

Designed by CCandG | Powered by Creative Communications and Graphics, Inc.